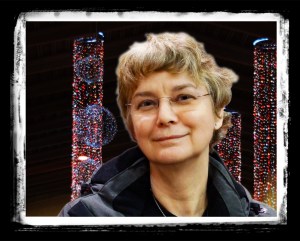 I was born in 1953 with four names, two of which were ‘Hermione’ and ‘Heppel’. It’s not the name my friends know me by, but it’s not made up either.

My professional life can be summed up as ‘three degrees and no career’, or alternatively, ‘physics, philosophy and floods of tears’. The degrees were all part of the desperate lifelong project to understand the world. During those years I was constantly trying to get answers from spiritual or therapy groups and classes but never felt I fitted in and never understood why.

But then, just as I was completing my Cybernetics PhD, I met the best Heppel-handler in the world. He and our two sons helped me to join the human race.

When I got the Aspie diagnosis in my sixtieth year, it explained everything and came as a huge relief. It was after that that I began writing Poor in Spirit.

Hobbies include gardening, scuba diving and poking sharp objects into fast-rotating pieces of wood. The woodturning club beats churches and gurus and meditation groups hands down.

Oh, and I’ve gone back to taijiquan. My teacher suggested that I think of it as a martial art rather than a spiritual exercise. It’s a much better approach for me, even though I shall never actually be entering any contests. The point is to keep the old bones moving, and it does that very well.