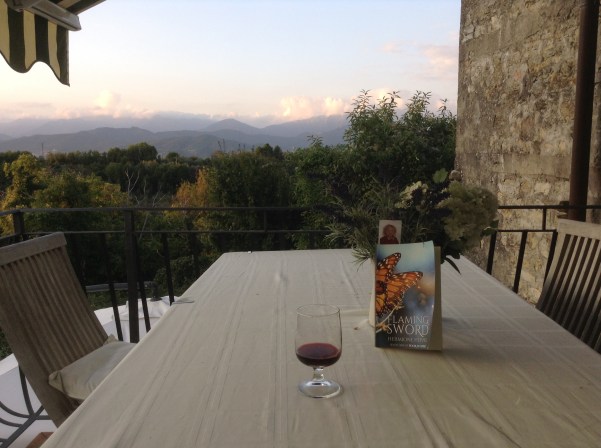 A kind reader sent me this photo after reading FS on holiday. This is the nearest I’ve ever got to Tuscany, in fact I don’t think I’ve ever been to Italy. It’s a beautiful part of the world.

The glass of red wine is apposite too – my favourite tipple!

I want to say that I’m flattered, touched and delighted by the number of people who have enjoyed the first two books and are asking for the third one. Thank you all,  from the bottom of my heart. These things are very personal, and people who know me have been generally reluctant to look at it, probably out of embarrassment. What has really surprised me is the number of men who have made the effort to take a look, finished it and asked for more! I mean, what with its being a transgender persona.

As I’ve said before, I wrote them because I needed to say certain things and found that fiction was the best vehicle. The first two books wrote themselves; they were my own stream of consciousness in my Vian mode. (I’ve started on Madelin mode in ‘Madelin’s Journal’, which I may well publish soon.) But the third book is different. I can’t just ‘find out what’s going to happen next’ by sitting down at the keyboard. I have to have some kind of ending in mind. Some kind of resolution, tying up loose ends. All loose ends have to have some kind of – well, at least mention – I mean for instance Vian’s parents probably won’t appear again and will be forever an unfinished element in his life. We all have those.

I’ve read that there are two kinds of writer: the ones who write furiously and edit at leisure and the ones who plan everything down to the last detail before they’ve set down a single word. I’m the former type; I don’t have a plot in mind. I respond to what happens and deal with it – or not – Vian’s autistic, and has his meltdowns. And his comfort zone has been pampered by twenty years in the seraphim.

But for book three I don’t even have a title yet. Spoiler alert – it will be a happy ending. I find unhappy endings unsatisfying. It has to be satisfying. I don’t think that’s too much of a spoiler. In the end, life is all about making our own death a happy ending.

So I’m taking a middle way – Buddha-style – and writing what comes to mind but with some background idea of where it will lead. This is a new element and I suppose it’s just about dragging the unconscious kicking and screaming up to awareness. It’s a balancing act, especially for an autistic. Awareness isn’t always a blessing. We’re already aware of so many tiny things. Perhaps the big things get lost in the noise. I need to bring them out and find a place for them. All part of the ongoing spiritual journey. I’m not expecting my kind readers to wait until I’m enlightened before i finish the chronicle of Vian’s journey, that would be a very long wait, and it’s not something that can be hurried. I’ve been creeping up on it surreptitiously for decades. At the moment I’m learning woodturning – poking very sharp things at fast-rotating pieces of wood and hoping that the result won’t be firewood. And spraying myself – every nook and cranny – with shavings, which get all over the house. Not a distraction exactly, the purpose is always there, but you can put a piece of wood on the lathe without a clear idea of what you’ll take off the chuck when you’re done. Just like the way I write. I have a vague idea, but the wood has its own characteristics – typically I put a piece that looks ‘interesting’ between centres and see what happens. I have yet to experience what a fellow member of the local club told me about, being sprayed with fragments of woodworm larvae, although I did cut one in half on the bandsaw once. I examine every piece of firewood before burning it, just in case it might be fodder for the lathe. And I suppose I do the same with the book. It goes in the gallery, or it goes in the fire.

But one thing I won’t do is try to shoehorn what I’ve read, even from the likes of Alan Watts, into Vian’s experience unless i know at first hand what he’s talking about. I will not repeat received wisdom. I did it before, decades ago, and it didn’t feel right. I’m old enough now to know what I know and what I don’t.