There’s mention of a hermit crab in WoL, in passing. It came from two things; the first was an encounter with a hermit crab in Plymouth Sound. It was a dull day above the surface but the water was relatively shallow – only a few metres – and there was plenty of light. There was a moment, one of those snapshots the brain remembers, of eye contact with a hermit crab. As you probably well know by now, Aspies don’t do eye contact very well, but a hermit crab is about as non-threatening as you can get. It looked at me, I looked at it, and it was a timeless moment. As if we were equals, I mean really equals, it and I, on its own ground. It wasn’t scuttling away, it was looking at me, this large thing with bubbles coming out of it every few seconds. Not like a staring contest. It was looking at me with what seemed to be detachment. I mean if it was afraid of me it would have either scuttled away or gone into its shell or something. Projection schmojection, but I will never forget it.

The second thing was a piece of footage from David Attenborough, showing a series of hermit crabs literally forming a line in order of shell size. The trigger is the arrival of a new shell on the beach, but they have to wait until everyone in the line has the right size shell to move into. When the biggest crab moves into the new shell, the others each move into the next one up.

Of such things are phrases in books made. 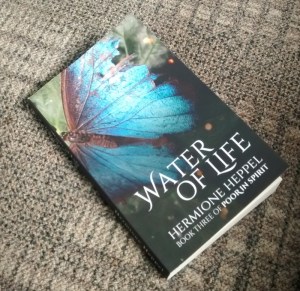 The proof copy of Water of Life arrived today. If all goes well it will be available on my Amazon author page ‘within five days’.

And that’s the trilogy complete!

I’m really glad I did it and I think the whole process has really helped me to get my ideas in order. And I want to thank all my kind readers for staying with me this far. I very much hope you enjoy the final stage of the journey.