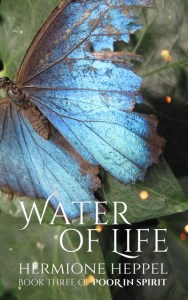 I have finally finished Water of Life, the culmination of the Poor in Spirit series and the end of the story. Thanks to Steviant for finding the cover image, which is under a Creative Commons licence and continues the butterfly theme.

It’s going through the Amazon publishing process now, both on Kindle and in paperback, as before.

We’ve been given the date 11 July as the Kindle availability date, but experience suggests it will be downloadable well before then. The process is entirely automated; as far as we can see there are no humans involved in the process at all. Perhaps Vian could have thought more about that, but he’s really more preoccupied with the brain and the traditional Hard Problem. At any rate, he’s finally come to terms with his spiritual disability and that’s what matters.

Among the sentences I’ve heard more than once, including ‘I’m really a loving and giving person but I’ve decided to become more selfish’, which basically can be translated to ‘I’m really a selfish person and I’ve finally decided to acknowledge that’ is this one about why questions.

I remember a ‘group’ once (I don’t do groups and this is partly why) where a person of apparently less than average intellect came up with this statement with the most smug and self-satisfied expression on her face. ‘Most people’, it seems, don’t ask ‘why’ questions.

First of all, yes, I have a problem with the way the concept of ‘most people’ is used. In more than (I would reckon) 90% of cases they are referring to an entity that they despise. ‘Most people’ don’t think about ‘x’, where ‘x’ is the topic under discussion. I heard a Quaker once say that ‘most people’ worship car boot sales rather than God. That’s what I mean.

Sadly, my impairment notwithstanding, I tend to identify with this entity. So when you insult ‘most people’, that’s me you’re talking about. So I look at this oft-repeated statement that ‘most people’ don’t ask why questions and I start to look around.

First of all, what is a why question? It occurred to me that a lot of why questions are actually how questions. A standard undergraduate physics exam question is ‘why is the sky blue?’. The answer is that molecules in the air scatter blue light from the sun more than they scatter red light. So we get more blue light hitting our retinas.

That’s not a why question, it’s a how question. If it were a why question the answer would be along the lines of either God decided to make that our experience or as users of the English language we came to a consensus to call that particular colour blue. Either of those would have failed the exam.

As a shorthand, I personally (you might disagree) look at a why question and see whether it could be rephrased as a ‘how come’ question. How come the sky is blue? Blue photons are scattered more and so they hit our eyes more.

If it’s a real ‘why’ question, it can be translated as ‘for what reason…’

Why did I decide to clear out my wardrobe today?

I was noticing there was a load of stuff in there I haven’t worn for several years.

It’s getting too full.

Reasons. Of sorts. Psychologists might be looking at mechanisms – you have a need to clear out your mind so you’re clearing out your wardrobe instead. That is an attempt at turning my decision into a how question. What are the mechanisms by which you came to think that clearing out the clutter in your wardrobe was what you really had decided to do? Blows free will out of the window for a start.

Leaving aside the knowing smirk from my friendly neighbourhood psychologist, I find myself wondering what a why question really is. It seems to me that often enough it’s prompted by a need to apportion blame. Why don’t you talk to me more? Why did you vote Leave? Why did you invade Iraq?

We ask why questions when we can’t understand the thinking behind a decision someone has made. No need to ask why if you already know why. Why questions are about values that don’t fit.

No wonder it’s called the ‘hard problem’. But meanwhile, it seems to me that people are asking why questions all the time. And it’s all about assigning responsibility.

And (a separate point entirely) generally someone else’s responsibility.